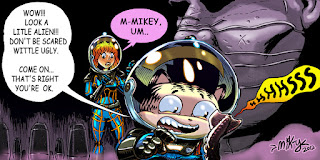 Most likely if you have seen the film Prometheus already , or are about to see it, you are already familiar with the Film "Alien" by director Ridley Scott.

If not I highly recommend it!!!

Prometheus ,starts when 2 archaeologist discover a cave painting that tells of alien visitors , who were worshipped and shows 3 stars in the sky.  This turns out to be one of many found paintings from around the globe, which the archaeologists believe to show humanities creators, The  Engineers!

Ten years later their discoveries have lead to this husband and wife team ,being placed at the head of a new expedition of private funding by the Weyland Corp.

The company has poured a trillion dollars into the building and supplying of the ship, Prometheus and selects a crew who seemed to have been put in cryogenic sleep before having boarded.

Since they  are awakened , introduced (seemingly for first time for some) and informed of their mission to meet these strange aliens from these ancient paintings, these engineers, their creators.

What happens in the course of the rest of this film can only be described as an Alien slaughter house picture.

And through all the gore and an alien abortion we witness the origin of all the original stages of the Alien (of the franchise name) and the purpose to which it to was created.

All the while the scientist never question that these Engineers are in fact our creators?

The mysteries of the Alien bone ship are just beginning to be discovered in Prometheus the movie, as Ridley Scott sets into motion some familiar set ups that will lead us to a sequel of this film, to fill in the still remaining gaps .

Despite all the negative commentary  of people moaning about the loss of mystery surrounding the origin of Aliens and the bone ship .
I am confident that the mystery of what happens next and how Ridley Scott, might fill in the remaining pieces of the puzzle in a sequel, will drive those same detractors straight to the theaters  on opening day.

I hope it arrives soon , I am so looking forward to it!!!